Welcome
The Normani Wiki is a FANDOM community dedicated to the American singer and dancer, Normani. Our goal is to provide a free online encyclopedia on everything about her. The wiki has reached a size of 99 articles. Topics covered include albums, songs, performances, tours, interviews, and more.
About Normani 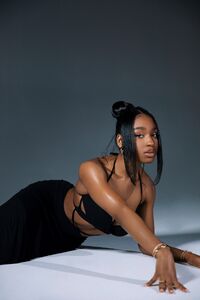 Born in May 31, 1996, in Atlanta, Georgia, Normani Kordei Hamilton auditioned as solo contestant on the second season of the American televised singing competition The X Factor in 2012. She failed to progress in the "Teens" category, so she was later brought back and put together to form a five-piece girl group, Fifth Harmony, with other contestants such as Ally Brooke, Camila Cabello, Dinah Jane, and Lauren Jauregui. Following their exit from The X Factor, the group released their extended play Better Together. The group has since released four studio albums and eleven singles. In 2018, the group announced their decision to take an indefinite hiatus to pursue solo projects.