On October 21, it was announced that Normani had signed to management company S10 Entertainment as a solo artist. During an interview in March 2018, Normani confirmed she was working on her debut solo studio album.[2]

On April 9, 2018, Normani signed with Keep Cool/RCA Records, a new joint venture co-founded by Tunji Balogun, for the release of her album.[3] She expressed her gratitude for the deal in a statement: "I’m so incredibly grateful to be able to be in a place where I can explore myself as an artist and what I’m capable of…Never in a million years did I think I would be in this position in 2018. Everyone has been so supportive and patient; thank you so much to my fans for giving me the opportunity." 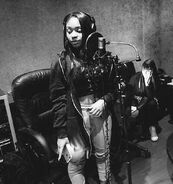