Fifth Harmony spoke about the extended play in an exclusive interview, saying "It’s definitely going to sound different. All of the songs have a common thread – they’re all a genre of pop, we’ve got a ballad in there. There’s an 80’s song in there, they all sound really different, but there is a connection there".

The group served as one of the opening acts for Cher Lloyd's I Wish Tour which commenced on September 6, 2013. All of the songs appearing on the extended play were performed as part of their setlist, including bonus tracks that appear on the iTunes and Target versions. On the day of the release of Better Together, Fifth Harmony were interviewed during a 30-minute "Live From MTV" stream on MTV. They also performed "Miss Movin' On" on Live with Kelly and Michael and The Arsenio Hall Show.

The quintet appeared on VH1's Big Morning Buzz Live with Carrie Keagan on October 23. Other promotional visits during the week of release included visits to Billboard headquarters and a trip to the top of the Empire State Building with members of the media for photo ops and short interviews.

"Miss Movin' On" was released as the group's debut and lead single on July 16, 2013. The song debuted at number 85, and peaked at number 76 on the Billboard Hot 100, spending a total of eleven weeks there and charting at number 27 on the Billboard Pop Singles chart. The song was certified Gold in the United States for selling combined sales and track-equivalent streams units of 500,000 in June 2014.

"Me & My Girls" was released as a promotional single through Radio Disney and reached number 4 on the Bubbling Under Hot 100, number 17 on the Heatseekers Songs, and number 53 on Digital Songs. 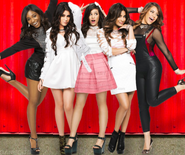 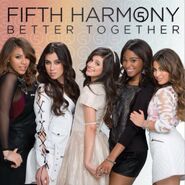